Through the years there has been one name, and primarily only one name associated with helicopter aerobatics.  Of course we’re talking about the one and only Chuck “Malibu” Aaron.

Chuck is known for a number of things.  For being the only helicopter pilot in the United States licensed by the FAA to perform aerobatics, for being able to loop, roll, perform vertical climbs, Split S, Cuban Eight, Immelman, and “Chuckcevak” (modified Lomcovak) in what appears to be effortless perfection, for his shoulder length flowing blonde hair, being an A&P that built a few TAH-1F Cobras out of spare parts ( <— Yeah, back up and read that a few times and let it sink in),  his love of flip flops and last and certainly not least, his mustache.  For the past ten years flying with Red Bull, Chuck has wowed audiences in his Messerschmitt-Bölkow Blohm BO-105 nearly 250 times.  However, all good things must come to an end and at the Red Bull Air Race at the Las Vegas Motor Speedway on October 17 and 18, 2015, the man, myth and legend locked the collective for the last time.  Throughout every twist and turn, one person has been at his side the entire time.  His mustache.  We had a chance to sit down and talk with the iconic facial feature that even Teddy Roosevelt would be proud of.

When asked how he got started into helicopter aerobatics, Malibustache had this to say: “You know to be honest, I didn’t really have a choice.  I’ve been around Chuck for quite some time so I’m used to his adrenaline junky demeanor, but when he decided to push the limits and start doing flips, I was really hoping he’d decide to go clean shave for awhile.  I really thought he had given up when he kept hitting the vertical climb and rolling out at his “chicken spot” before fully finishing the maneuver, but that mighty day when he did, I was hooked!  Chuck and I both smiled simultaneously and we went back and did it over and over again after the first success.  We’ve been doing them together for years and it is still just as fun as the first time.”
Malibustache then went on to say the following:  “You know Chuck might be retiring, but I’m just not ready.  I have been using a lot of good mustache care products and I feel vibrant and young and I’m not hanging it up quite yet.  Chuck has always been good to me, minus the occasional coffee burns, but I’m hooked and need those abrupt changes in G Forces.  I’m not quite sure how to break it to him, but I’m sure he’ll understand.”

Congratulations to Chuck “Malibu” Aaron on your retirement.  We’d say keep the rotors up, but that doesn’t apply to you. 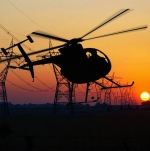